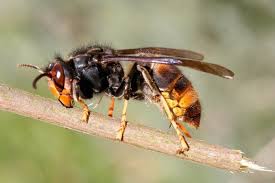 Andrew Durham is a Cambridgeshire beekeeper who has travelled extensively in France and who spent the last three years researching the Asian Hornet. He has written articles on the Asian Hornet for the BBKA News and given a number of briefings to local beekeeping associations.

The briefing is split into six sections and covers:

The Asian hornet – why it is such a problem for beekeepers, how it predates bees and the bees response. Nests and lifecycle. By the end of this section you will know all about the hornet and the opportunities for control of the hornet over its yearly cycle.

The Invasion of France – I will cover the arrival of the hornet in France, how it has spread across France, and its impact on French beekeepers. The factors affecting its establishment / nest densities. By the end of this section you will have a good understanding of the scale of the problem and what you are likely to encounter if it establishes itself near you.

The Spring Trapping of Foundress Queens. I will give a balanced view of the issues surrounding this very controversial subject in order that you can decide whether or not you should trap in the Spring.

Management of bees under predation. Bees subject to predation by the hornet are under great stress. Absconding colonies, queens off-lay or even killed are a common outcome of hornet predation and colony failure over winter is a real danger. We will look at what beekeepers need to do to help their bees.

If there is time; we will look at the Collective Fight against the hornet in France, covering organisation, nest location and destruction.

At The Discovery Centre, Stockwood Park